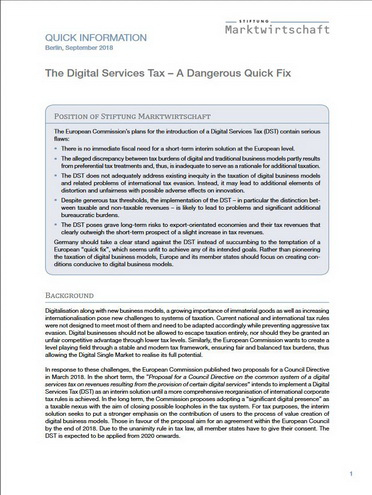 The European Commission and numerous member states of the EU intend to introduce a European Digital Services Tax (DST) as an interim solution in response to tax challenges posed by digitalisation.

At first glance, the reasoning behind the proposal sounds persuasive. Upon closer examination, however, the arguments used by those in favour of the DST reveal themselves as hollow promises. The tax is unfit to achieve any of its intended goals. Not only would it fail to solve existing problems associated with the taxation of digital business models, but also it would lead to further distortions of competition and tax injustices. At the same time, the long-term risks and potential costs of such a rash “quick fix” are severe.

The Quick Information “The Digital Services Tax – A Dangerous Quick Fix” aims to inform the ongoing discussion by highlighting the serious flaws of the DST as well as its risks.