The Monetary Policy Strategy of the European Central Bank 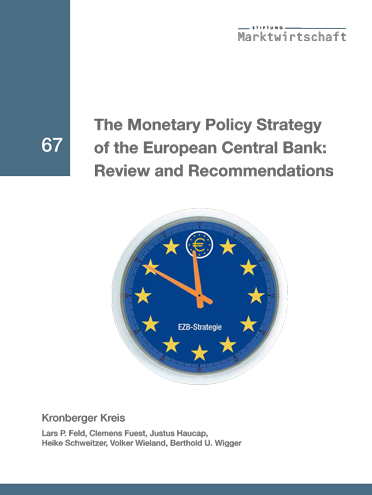 The European Central Bank (ECB) is currently conducting a review of its monetary policy strategy. The last formal review took place in 2003. Now the focus is on the extent to which this strategy has contributed in recent years to fulfill the mandate set out in the Treaties of the European Union and whether certain elements need to be adjusted. Against this background, the Kronberger Kreis, the academic advisory board of the Stiftung Marktwirtschaft (Market Economy Foundation), examines whether the ECB's monetary policy strategy still holds promise for success, whether its mandate should be reinterpreted and how the use of specific instruments should be assessed.

In its analysis, the Kronberger Kreis draws on the experience of the financial crisis, the euro debt crisis and the coronavirus crisis and argues that greater attention should be paid to the side effects and proportionality of monetary policy measures. The central banks of the Eurosystem are now the largest creditors of the member states. Fiscal dominance of monetary policy should be avoided. The ECB's hierarchical mandate prioritizing price stability should not be called into question. The envisaged numerical target for consumer price inflation of below, but close to, two percent remains reasonable. However, the ECB should also consider other measures of inflation in its decisions and their communication. In addition, the ECB should rely more strongly on quantitative benchmarks (interest rate rules, money supply growth). The transparency of monetary policy could be significantly increased, for example, by publishing surveys and forecasts of the ECB's Governing Council. In principle, all measures must take into account the need to strengthen the independence of the ECB and the stability of the monetary union.