No Retreat into Fortress Europe! 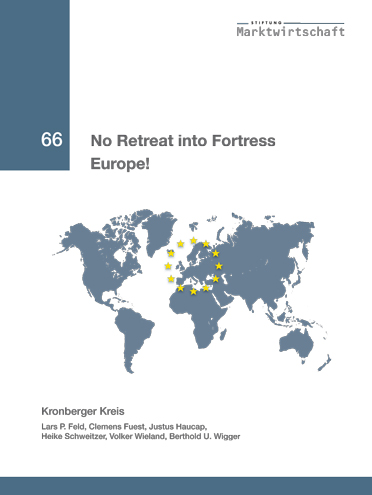 The Corona pandemic exposes the strengths and weaknesses of the European Union (EU) as well as the differences in the resilience of the European economies. This study therefore looks at how the EU and its member states can emerge stronger and more competitive from the crisis. The ideas of the German and French governments and the European Commission suggest that the EU will move away from the model of a liberal and competitive social market economy towards a more state-controlled and protectionist economic system. Isolation, dirigisme, restriction of competition and an extended welfare state are supposed to protect the European population and economy from all those challenges in a changing world which are perceived as a threat.

In this analysis, the Kronberger Kreis, scientific advisory board of the Stiftung Marktwirtschaft, warns against a retreat into Fortress Europe. An isolated community of states would lose its innovative strength and productivity, weakening its competitive position. This strategy would further increase the economic divergence and the loss of competitiveness within the EU. The seemingly old-fashioned alternative remains a market economy that is based on competitiveness through more – not less – competition. Competition creates innovation, ensures choice, reduces dependency and safeguards jobs and prosperity. It is the fundamental principle for a free and humane economic order.